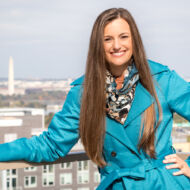 This user has not added any information to their profile yet.

Jaime
Chapman
U.S. Military Spouse Chamber of Commerce
Jaime Chapman is the Co-Founder and COO of the U.S. Military Spouse Chamber of Commerce, and also the Founder & CEO of Jaime Chapman Enterprises, a consulting firm specializing in training small to medium sized businesses how to hire, retain and promote military spouse talent. She has placed over 1,600 people creating an economic impact over over $112 million. Jaime has won a couple of major awards: • #1 Military Spouse Owned Business Overall Award by Military and Veteran’s Choice in September 2019 at the Military Influencer Conference in DC. • 2020 Armed Forces Insurance US Army Garrison Wiesbaden Military Spouse of the Year Award. Jaime is a proud military spouse and served in the U.S. Army for 6-years. She is a philanthropist and fierce advocate for the military community, actively advocating to reduce the 22% military spouse unemployment rate. She is also a professional speaker and member of the Woman Veterans Speakers Bureau.
855-855-8511
jaime.r.chapman@gmail.com
www.jchapman.com
MSCC_Logo.png
Facebook
Twitter
LinkedIn
Instagram
YouTube